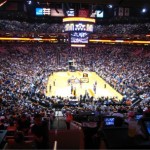 The Phoenix Suns are a professional basketball team based in Phoenix, Arizona, United States. They are members of the Pacific Division of the Western Conference in the National Basketball Association (NBA), and the only team in their division not to be based in California. Since 1992, the Suns have played their home games at the US Airways Center in downtown Phoenix.


Suns fans have a lot to cheer about these days with some of the new trades that are being announced. Get your Suns tickets and the best seats in the house to enjoy the games at Phoenix Suns Arena right here on SportsTicketBank.com.


NBA Basketball Phoenix Suns at Phoenix Suns Arena tickets are almost always available right here on SportsTicketBank.com. Don't forget to sign up to our email list to get special announcements on the Suns and other special ticketing opportunities.